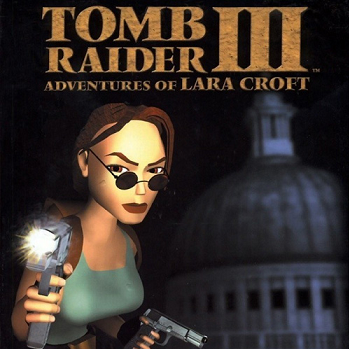 Your perception of good timing is...bad!
"Although I've got my new weapons to help me, I'll certainly have to use my wits a lot more for this adventure.'"
— Lara Croft, in her promo

for this game. She's not kidding.
Advertisement:

One of the more outlandish entries in the series, the story begins with a meteorite impacting prehistoric Earth, destroying all wildlife in the area and creating the frozen landscape of Antarctica. In the present day, Lara Croft is exploring the Indian jungle in search of the Infada artifact until she runs into a researcher named Dr. Willard, who reveals to her the location of 3 other similar artifacts around the globe, and enlists her help to retrieve them. His actual reasons for getting all the artifacts are unclear...

The game is built on the advanced graphics engine from Tomb Raider II, adding multicoloured lighting effects, environmental rain, fog, and wind direction. Lara herself gained the ability to crouch and crawl on the ground, monkey-swing over chasms, and sprint to gain short bursts of extra speed. Various sound effects were also changed or improved (the most recognizable example being the pistol shooting sound), and the use of short musical cues/stings was greatly expanded. However, the game is probably most (in)famous for its ridiculous difficulty level; playing the first two games in the series is considered a prerequisite to even attempting the first level of this one, and even then you're going to have a tough time.