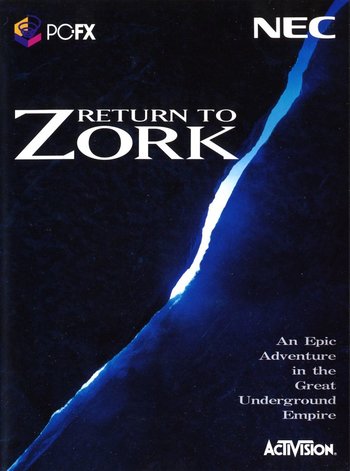 Return to Zork (1993) was the first graphical game in the Zork series.

The player character is a sweepstakes winner who won a trip to the Valley of the Sparrows, which turns out to be a rather depressing place. The PC enters the town of West Shanbar and hears from the townspeople that East Shanbar mysteriously disappeared. Naturally, the PC has to be the one to check it out, and ends up on a magical quest to stop the evil Morpheus from taking over.

Notable that this is the first Zork game to incorporate full graphics and even full-motion video, featuring a number of well-known actors, including Jason Hervey of The Wonder Years, Sam Jones, who played the title role in the 1980 Flash Gordon movie, A.J. Langer, who went on to co-star in My So-Called Life, and Robyn Lively, from Teen Witch and The Karate Kid Part III, plus a few of her family members to boot.

Want some tropes? 'Course ya do!