Video Game / The Tomb of the TaskMaker 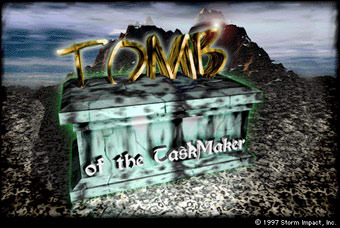 Set many years after the predecessor, the game now has the player leading the world from Castle Hall following the death of the TaskMaker. As its protector, the player is asked aid from people in neighboring villages. For the first tasks, the player is asked to retrieve objects possessed by monsters that terrorize said villages; after retrieving each item, it is destroyed.

After a while, the player gets word that the TaskMaker has come back to life. The next task is to retrieve the key to his tomb. Upon arriving at the tomb, the player discovers that the word of the TaskMaker's rise was a ruse planted by the Captain Guard, who must then be defeated to restore peace in the land.

The game boasts many features beyond that of its predecessor, including the ability to make the player male or female, and a fighter, mage, or thief. A completely new world is built around Castle Hall, with many new dungeons and villages to explore. The graphics have been dressed up, as well.

However, it was released in a tight time for the company, and many corners were cut in the development. (See here

for further info.) The game never made it past version 1.0 until July 2008, when developer David Cook posted a slightly updated version on his website.