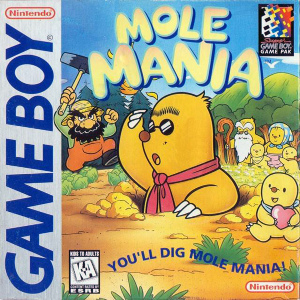 Old MacJinbe had a mole...
Holey moley! Muddy Mole's entire family has been abducted by that malvolent mole-napper, Jinbe! It's a terrible predicament for the mild-mannered mammals, but the scene is set for the most challenging puzzle-action game since the Adventures of Lolo series for the NES. As Muddy Mole, you must use your sharp sense and expert mole hole-digging ability to clear the many rooms that stand between you and your anxious family. Time's running out—dig in!
— Nintendo Power #93
Advertisement:

A Game Boy game developed by what is now Pax Softnica, and a mostly unknown work of Shigeru Miyamoto.

Muddy Mole and his family normally live a quiet life, with Muddy doing the daily raid of crops for food, but an evil farmer known as Jinbe decides he's had enough of moles ruining his land. As a result, Muddy returns home one day to find that his wife and seven kids have been kidnapped, and Muddy must fight Jinbe to get them back.

The game uses a top-down view and amounts to an action-puzzler. Muddy can dig holes through soft ground and throw/push/pull objects to proceed. Despite his simple arsenal, Muddy finds himself working his way through seven levels of Jinbe Land to take down the bosses, which is naturally full of spikes, Mooks and other dangers that shouldn't be plaguing a cabbage farm.

It was released with little notice (for different reasons) in both Japan and the USA, leading it to become one of the most obscure-yet-enjoyable games of its time, though its Nintendo 3DS Virtual Console release gives it a wider audience.