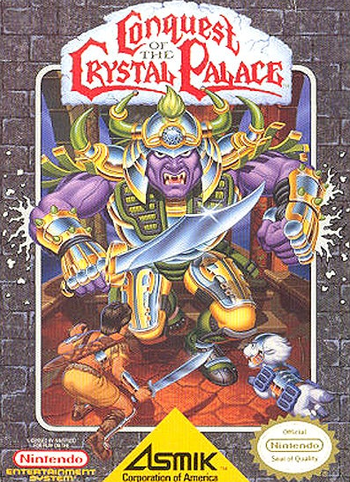 Conquest of the Crystal Palace (original Japanese title: Matendouji) is a side-scrolling Platform Game released on the Nintendo Entertainment System in 1990.
Advertisement:

The realm of the Crystal Palace was once a thriving kingdom, until the evil war spirit Zaras came and started wreaking havoc, causing the inhabitants of the palace to run for their lives. One young swordsman, Farron, comes forward along with his faithful guardian dog Zap in order to defeat the demon and restore peace to the kingdom.

The game has five levels where Farron will jump, hack and slash his way through enemies and encounter bosses. From time to time, he can purchase items from a shopkeeper named Kim, who will also brief him on the current situation around the Crystal Palace, if he so asks.