Nailed to the Wagon 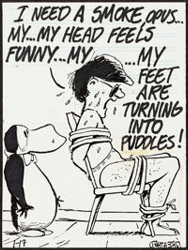 Well one fall day when Uncle Bill was having a cocaine fit
He said Louise this coke's no good and I've made up my mind to quit
Now you take this key and I'll go upstairs and then you lock the door
And Lord I swear I'll stay up there, till I don't want dope no more.
— Johnny Cash, When Uncle Bill Quit Dope
Advertisement:

Bob likes his booze. A lot. He may be a recreational alcoholic, or drinks to escape remembering his Dark and Troubled Past. Fate, being a cruel and fickle mistress, has other ideas. Alice drags Bob (usually shambling and slurring rather than kicking and screaming) somewhere without liquor of any kind. The reasons vary; Alice may be doing an intervention, she may be trying to save his life from people out for his blood, or Bob (all by his lonesome) stumbled onto a bus/ship/plane/rocket/Farside Island to a place where the only spirits are of the figurative variety.

Effectively, Bob has been nailed to the wagon and will be forced to go sober against his wishes. He'll whine, complain and take every opportunity to get a drop of booze. (Oddly, he will seldom see Pink Elephants, although in Real Life, they are the consequences of withdrawal rather than drunkenness.) However, once he's over a rather epic hangover and finishes his physical withdrawal, he'll do the emotional equivalent of curling into a ball in a corner because now he can no longer avoid facing his life. If he can resolve whatever emotional hangups were leading him to drink the sadness away, he may decide that being sober is better, and it will stick. If he's fundamentally unchanged, he'll jump Off the Wagon into the nearest vat of beer.

While this kind of gesture is usually well-intentioned, in Real Life completely cutting a person off from physically addicting drugs can cause withdrawal symptoms so severe that they could actually die from the body's chemical imbalance. So for any readers hoping to get a loved one off the juice, remember to do so gradually.

Despite the use of beer in the description, this trope also applies to other forms of drugs. Notably caffeine.

A form of Kind Restraints. Compare Going Cold Turkey, when the sudden withdrawal is a voluntary decision on Bob's part. Also see No Matter How Much I Beg, where the character makes the decision to shut himself away from temptation, with friends enlisted to enforce that decision after the fact.