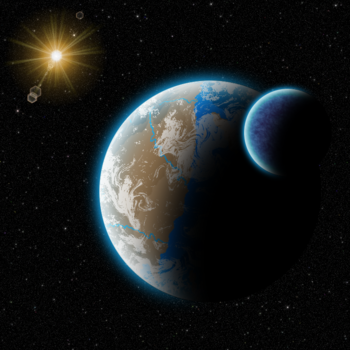 Sagan, Sagan 4 and Mason.
Sagan 4 is a collaborative Speculative Biology Worldbuilding project originally created by Hydromancerx in 2006, which was rebooted in August 2019. In both the original (Alpha) and the reboot (Beta), all life on the planet is "evolved" by its contributing artists from a single cell. It was originally hosted on its own website, but lacking funds led to the website being taken down in 2017 and the project being transferred to the Speculative Evolution Forum

. Although a backup was made, the data was presumed corrupted and apparently unrecoverable; after 2 years of failed attempts to recover or repair the lost data, some members decided to continue with a reboot, reverting to the state it was in just 7 days after it began. Not long afterwards, however, all data for the original version was recovered, and members wanted to continue both, so there are 2 timelines now.