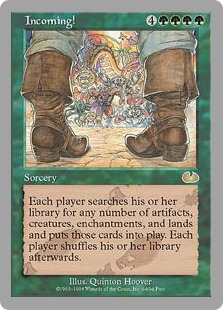 A Stock Phrase where a character (often the Plucky Comic Relief) alerts the other character(s) of an "incoming" danger, often a large, falling object of some kind.

Expect an Oh, Crap! or two on the side.

This is Truth in Television as "Incoming!" is the traditional warning call for artillery shelling about to hit a unit's area. Since this is often the deadliest form of attack, the soldiers definitely have to find cover.

Not to be confused with the 1998 game of the same name by Rage Software.