Film / The Sure Thing 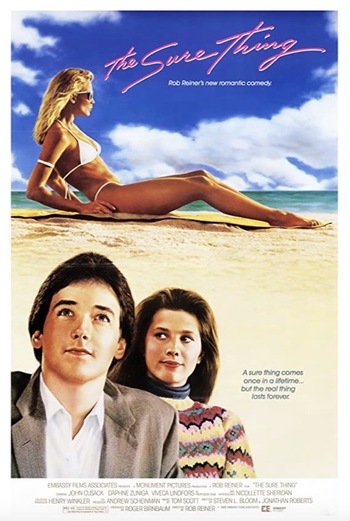 Walter "Gib" Gibson (Cusack) is just an 18-year-old Cool Loser at some snowy New England college, trying to get laid and trolling on Allison (Zuniga), the Brainy Brunette in his English class. It's not going well. Then Lance (Anthony Edwards), his best friend from high school who's now going to college in Los Angeles, sends him a picture of a hot blonde (Nicollette Sheridan), with the assurance that she's "a sure thing." If Gib can make it out to L.A. for winter break before "the sure thing" goes off for a semester at sea, he can totally bag that. Gib goes along on a rideshare, only it turns out that Allison's going to L.A. to visit her boyfriend too...

Tim Robbins has a small part as a cheerful student who ultimately regrets sharing a ride with Allison and Gib.