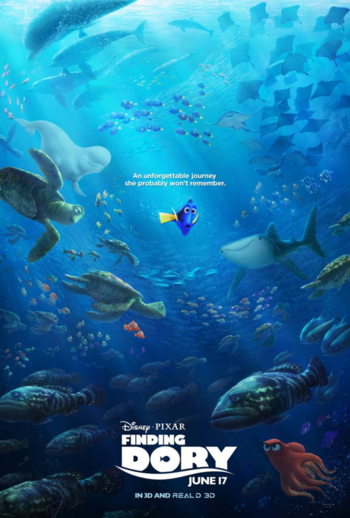 She just kept swimming...
"What would Dory do?"

Taking place one year after the events of the first movie, Dory starts to recall memories of her long-lost family. Going by her memories of "the jewel of Morro Bay, California," Dory sets off to exactly there, with Marlin and Nemo going along for the ride. However, Dory gets separated from Marlin and Nemo once they arrive, so Dory must explore the Marine Life Institute in search for her parents while Marlin and Nemo find where Dory was dropped off.

Soon after her separation, Dory meets Hank, a cranky septopus (an octopus missing a tentacle) who dreams of spending his days alone in an aquarium in Cleveland. Together they navigate the Institute while meeting plenty of colorful creatures, including a nearsighted whale shark named Destiny and a sarcastic beluga named Bailey. Traversing from the sickly Quarantine holding zone to the Locomo... er, Open Ocean exhibit, Dory sets on a journey larger than herself, and perhaps discovering who she really is along the way. Sigourney Weaver "appears" as the narrator of the Marine Life Institute.

What lies next for the Finding saga? Andrew Stanton has been very quiet about it since the film's release; currently, he is busy working on Stranger Things, and Pixar is busy developing original material for the next several years. However, if some fairly optimistic comments from Stanton and the film's sequel hook after the credits are any indication, there's more to come!

Played in theaters along with the Pixar short Piper.

"Hello. I'm Sigourney Weaver. Welcome to the tropes for the film, Finding Dory.":

"Hello. I'm Sigourney Weaver. Thank you for visiting the Tropes Page for the film, Finding Dory. Have a nice day."