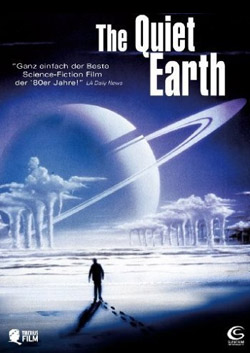 "Zac Hobson, July 5th. One: there has been a malfunction in Project Flashlight with devastating results. Two: it seems I am the only person left on Earth."

The Quiet Earth was a 1985 film created in New Zealand and directed by Geoff Murphy, starring Bruno Lawrence as a scientist who awakens in a hotel room to find himself the last man on Earth. The film was originally based on a novel by Craig Harrison, but bears very little resemblance to the novel's plot. While the film was marketed as a film about the last man in the world, the trailers did a good job of spoiling that particular plot point.