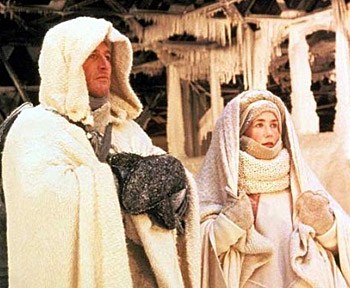 Quintet is a 1979 Science Fiction film directed and co-written by Robert Altman (his only pure Science Fiction film)note 1968's Countdown is about astronauts, but is more of a straight drama, starring Paul Newman, Bibi Andersson, Fernando Rey, and Vittorio Gassman.

It's humanity's last gasp as an ice age covers the earth and mankind is pushed to the fringes of existence. Once great-cities now lie in ruins as people forage for food and dogs eat corpses in the streets. With no future and only the barest sense of civilization, a mania arises for a Tabletop Game called Quintet, where a group of six people (five players and a "sixth man") compete for the opportunity to "kill" one another, with the ultimate goal of becoming the final survivor. Essex (Newman), a hunter who's run out of game to hunt, returns to his devastated home city and stumbles on some people who have taken the game a little too far...