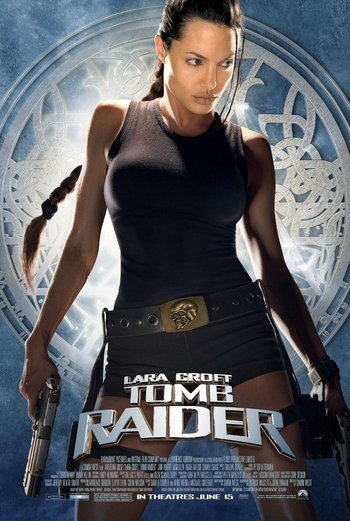 The first film, Lara Croft: Tomb Raider, was released in 2001. Lara is off looking for the Triangle of Light, which The Illuminati seek in order to control time. She has until the planetary alignment to do so, and has rival/love interest Alex West (Daniel Craig) in her way.

The second film, Lara Croft Tomb Raider - The Cradle of Life, has Lara in search of Pandora's Box. Evil scientist Jonathan Reiss (Ciarán Hinds) seeks to weaponize the contents of Pandora's Box for biological warfare. Lara is paired with mercenary and former love interest Terry Sheridan (Gerard Butler), an ex-SAS man who betrayed the country and gets his chance to pay penance.

Both films provide examples of:

Example of:
Eating the Eye Candy