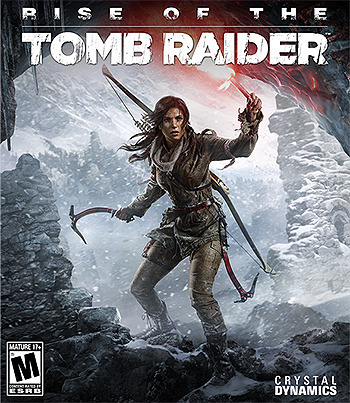 Discover the Legend Within.
"Throughout history, the boldest have dared to go further. They risked death and in doing so live on forever. What drives these few to the ends of the Earth? The desire to discover something more? The search for something greater? The world is full of unanswered questions. Beyond all limits, all reason, the answers await. For some, discovering the secrets of the world... is the only way to live."
— Lara Croft
Advertisement:

Following the events of Tomb Raider, Lara Croft travels the world in search of myths and legends, to discover the truth behind the immortal beings she encountered on the island of Yamatai. Standing in her way is a sinister organization known only as "Trinity", who will stop at nothing to obtain the Divine Source for themselves.

A sequel titled Shadow of the Tomb Raider was released on September 14, 2018.