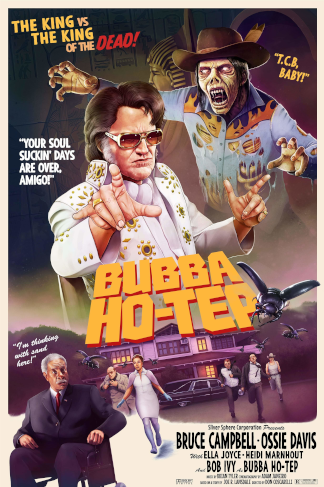 Bubba Ho-Tep is a small-release film, written and directed by Don Coscarelli (based on a short story by Joe R. Lansdale), starring Bruce Campbell and Ossie Davis. The premise; three old men far removed from their proper places fight it out for their souls. Did we mention the three are Elvis, an old black man who claims he's John F. Kennedy, and a mummy dressed like a cowboy?
Advertisement:

In the 1970s, Elvis Presley (Campbell) sought out the world's greatest Elvis impersonator, Sebastian Haff. They secretly switched places, so Elvis could retire in peace. Unfortunately, all the documentation was lost in a trailer explosion, Haff died from a drug overdose, and Elvis fell from the stage while impersonating himself and went into a coma for twenty years. Now alone, assumed crazy, and convalescent in a west Texas retirement home with a mysterious growth on his genitals, he languishes.

John F. Kennedy (Davis), once president of the United States. His death faked, half his brain removed and replaced with a bag of sand, and his body dyed black by the CIA, Kennedy is also a resident of this same rest home - that's his story, at least. The woman who claims to be his niece is nice enough, and he fears for his life if he goes public, so he sits, re-creating Dealey Plaza in miniature, trying to figure out just what happened to him. He's the only one who believes his neighbor Elvis really is who he claims to be (though Elvis believes he's nuts).

The mysterious cursed mummy was stolen from a museum by treasure-hunting rednecks, dressed in a cowboy outfit, and lost in a storm in the river by the retirement home. He rises from the depths to consume the souls of the living, feeding at the retirement home to avoid detection, releasing the residual parts of their souls into the men's room, and scratching obscene hieroglyphs on the stall. The defeated and sick elders aren't very nourishing, but no one misses them. No one believes them. No one cares. In addition, the film achieves a strong sense of realism by having the mummy prey on elderly people who require walkers, canes, and wheel-chairs to get around, if they are not actually bed-ridden. Being slow and plodding, the mummy would not be a real threat to typical horror movie protagonists who are usually teens or young adults who could easily run circles around it.

Only JFK and Elvis can defeat Bubba Ho-Tep before he condemns more helpless elders to an afterlife in the sewer.

A sequel, "Bubba Nosferatu", was planned (and hinted at in the credits), but died in the planning stage when Bruce Campbell declined to reprise his role.

Elvis: Oh, what do I care, man? I got a fuckin' growth on my pecker!