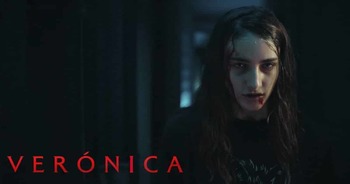 Veronica (original title: Verónica) is a 2017 Spanish horror film directed by Paco Plaza (one of the two creators of the [REC] series) and distributed by Netflix. The plot is very loosely based on the backstory of the "Vallecas Case", an alleged 1992 poltergeist in Madrid reputed to be the only time in Spanish history where a police officer claimed to witness paranormal activity in his intervention report.

The titular character, Veronica, is a 15-year-old working class girl who plays with an Ouija Board at school during a total eclipse in 1991. While her first intention is to contact her recently deceased father, an unknown evil hears her instead and starts manifesting in her home, where it endangers her and her little siblings.