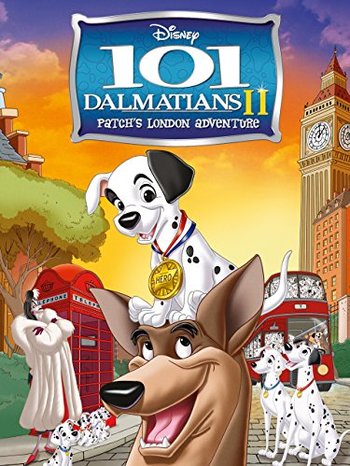 The Radcliffe family and their Dalmatians are preparing to move their "Dalmatian Plantation" out in the countryside, but Patch feels ignored amongst his 98 siblings. After being accidentally left behind on moving day, Patch decides to visit his TV hero Thunderbolt, who has just been told that he is set to be killed off in the next episode. Desperate to stay on the show, Thunderbolt decides to pull some real life heroics and recruits Patch's help due to his knowledge of his feats on the show. However when Cruella de Vil plans to steal the Dalmatian puppies again, Patch and Thunderbolt must become real heroes and save the day.

Dogs bark in tune to the second half of the music.

Dogs bark in tune to the second half of the music.