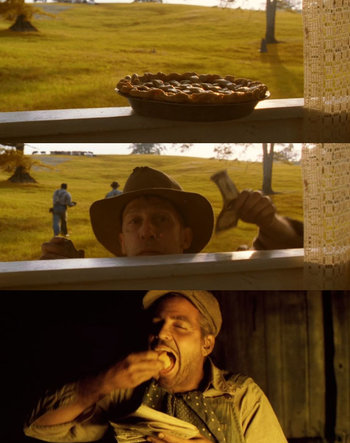 When disaster has struck, and most of the populace in the affected area is either dead or evacuated, the remaining survivors are sometimes forced to steal from local stores and homes to obtain the goods they need to survive the aftermath.

This situation can cause a moral quandary for people who have a strict code of honor. While most of the characters depicted will have little issues with doing what they need to get by, the Noble Shoplifter will struggle with the decision to steal from someone who may or may not be returning for their property at some point. While these characters are often shown to initially struggle with the decision, they will usually come up with a simple solution: they leave behind money or some other valuables that cover the cost of whatever they take. This makes the act less like "stealing" in the mind of the Noble Shoplifter, and more "buying without the previous owner's knowledge".

It's not uncommon for the Noble Shoplifter's companions to give him or her a hard time about it, arguing that the former owners are very likely dead and that priority should be given to the living. They may also argue that there is nothing to stop other groups of scavengers from taking the valuables the Noble Shoplifter leaves behind... in fact, a more unscrupulous member of the Noble Shoplifter's own party may find an excuse to backtrack and do exactly that.

This trope is primarily used to portray the moral fiber of a character. In works where the Noble Shoplifter is displayed in a positive light, this reflects that they are the kind of person who will do the right thing, regardless of the fact that there are no negative consequences to giving in to the impulse to just take what they need. Other works may serve as a contrast, framing the Noble Shoplifter as Lawful Stupid while their peers are simply being pragmatic given the circumstances.

A common variation of this trope takes place in non-disaster related stories wherein The Protagonist needs to get something from a shop, but the shop is closed or the clerk is unavailable. Usually pressed for time, the character will take what they need anyway but leave enough cash behind to cover it.

Contrast Disaster Scavengers, Planet Looters and Gentleman Thief. Rarely seen in a Scavenger World, as those settings are usually far beyond the point where original ownership matters. Can overlap with What You Are in the Dark.