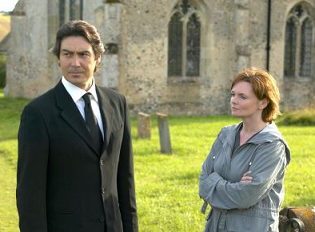 He's a Lord. She's not a lady. Think you can fool them? Think again.
You two really are a double act, aren't you!
— DI Fiona Knight, The Inspector Lynley Mysteries, "Natural Causes"
Advertisement:

The Inspector Lynley Mysteries was a BBC series that ran from 2001—2007, starring Nathaniel Parker as aristocratic Detective Inspector Thomas "Tommy" Lynley, 8th Earl of Asherton, and Sharon Small as his working-class partner, Detective Sergeant Barbara Havers, both of Scotland Yard. The first eleven episodes were based on novels by the American author Elizabeth George, though the author's plots and characters were often significantly altered, and the show went its own way from that point on. Most, if not all, fans consider the television show to take place in an Alternate Continuity from the books.

George is one of only two American writers* the other is Tony Hillerman whose novels have been adapted for PBS' MYSTERY!

The intrigue of the show came almost entirely from watching the lead characters navigate the inevitable clashes of personality, gender, class, and opinion that arose from their radically differing backgrounds. Over time, Lynley and Havers discovered that their differences complemented each other more thoroughly than either of them could have expected. Moreover, they found numerous unexpected similarities, including a mutual devotion to justice, distrust of the higher-ups, and tendency to screw the rules in favour of doing what's right. While they remained two very different people, the bond that developed between them changed them both for the better and created a partnership more enduring and effective than anyone could have ever predicted.