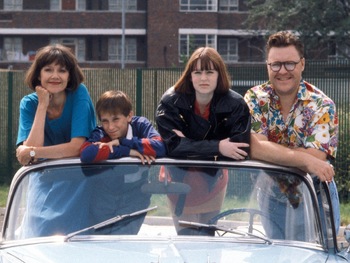 Named after the then-average number of children in a British family — today it would probably be 1point8 Children.

The actress for Jenny was replaced in the third season. In the final season, the character was sent to university, and a new teenage child adopted.

The episodes could be very surreal — one ended up as a parody of The Prisoner (1967). And Bill had numerous prophetic dreams given to her by her Spirit Advisor, a biker.

2point4 Children is a prime example of Magic Realism. It was written by Andrew Marshall, whose former writing partner David Renwick was responsible for the more successful One Foot in the Grave (which was more like tragic surrealism). Both jointly created classic radio comedy The Burkiss Way. 2point4 Children has strong echoes of Burkiss, but is a little less surrealistic.

The theme tune for Series 6 and 7 of "2point4 Children" features the characters awkwardly dancing to the theme song.

The theme tune for Series 6 and 7 of "2point4 Children" features the characters awkwardly dancing to the theme song.