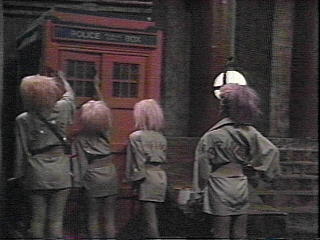 Well, that's one way to beat the blues.
"I can hear the sound of empires toppling."
—The Doctor
Advertisement:

The one where the TARDIS gets painted pink, and the BBC gets sued over a really weird looking robot.

Rowan Williams, Archbishop of Canterbury, referred to this story in his 2011 Easter sermon, on the subject of happiness and joy. No, really.

The Doctor and Ace visit the human colony planet of Terra Alpha, where unhappiness has been outlawed, and people who can't keep a smile on their face at all times have a tendency to... disappear.

While the Doctor befriends a blues-playing tourist named Earl and Ace meets her Girl of the Week Susan Q, the TARDIS gets a nice pink makeover from the Happiness Patrol. Everyone gets thrown into prison a few times over. Well, into the "waiting zone", that is — because a happy place like Terra Alpha couldn't possibly have prisons. They also meet the Kandy Man (who bears a striking resemblance to the advertising mascot Bertie Bassett

— not deliberate, but the BBC got in trouble from Bassetts all the same), a psychotic killer robot made of candy, whom the Doctor defeats in a Kerb-Stomp Battle by sticking its feet to the floor with lemonade. The underground Mole Men and the working class join in the battle against the current regime as well, as does a hapless interstellar census bureau employee, after the Doctor runs circles around him intellectually.

The Doctor goes a bit too far in his investigations, though, and soon comes face-to-face with a very powerful gun. In a rather serious scene for what's otherwise the most perfectly camp story in a while, he dares the gunman to shoot him point blank, which causes a Heel Realisation in the soldier and leaves the Doctor able to continue his staged uprising. It all culminates in a sort of song-and-dance number, with the Doctor proclaiming that the oppressed working class people are really tremendously happy and therefore can't be arrested. The Happiness Patrol is very unhappy about this turn of events. So the Doctor tells them that they should now logically arrest each other for being glum. Which they promptly do.

The local dictator, Helen A (who bears a striking resemblance to Margaret Thatcher — deliberate, Word of God would later say) decides to get the hell out before her society comes crashing in on itself. Sadly for her, her gentle husband runs away together with Kandy Man's creator, and the two make off with the only escape pod. And her mutated rat-dog-thing Fifi is killed using The Power of Blues. Helen breaks down crying, realising perhaps for the first time that happiness isn't everything.