Unfinished by his creator, Ken is a robot. He goes to Sentai School to go further into his hero training.Ken has a lousy habit of creating impossible complex theories to solve even the most simple problems, he misunderstands almost everything he hears. He knows jack shit about human life. Weirdly enough, he's The Hero of the band and wears a Blue Jacket.

The Dark and Badass guy. He's the Lancer of the band. Because badassery is a bloodline trait of his family, he's ashamed of his father and brother, who puts this ability to waste. He seems to like Bibi a bit but he hides it. Hongo wants above anything to be the defender of justice and hates evil with a passion. He's probably the most serious and hot blooded guy in class, to ridiculous levels. He's excellent in badass cape and badassery lessons. Just don't piss him off. He wears a grey jacket.

The big guy and chef of the group, Big eater. His dream is to serve jutsice as a cook and create new epic recipes. His name is actually a pun in french, ( In english his name would be "Yuu" to emphase the pun ), this is sometimes the subject of misunderstandings. He hits the jackpot on volume 4 after creating a bread containing sausage flour. He wears a Red Jacket.

As the chick of the band, most of the time, he's opposed to Hongo's badassery, he's friend with everything that is cute. He's always overstressed during finals even though he's top tier in lessons. But when sometime bother him or piss him off enough ( Like when someone it too damn "close" of his sister ) he goes to the dark side and becomes Dark Keiji, someone terribly negative and unpleasant. He can even surpass Hongo in badassery.He's got a pink jacket.

The lonely dreamer. He plays guitar, lives in a tree, near furries, animals and alone. The only one who can shut down Koji.Always chased by girls, he would hope they'd forget about him. He's Chibi-Goldo's owner and wears a Yellow Jacket. 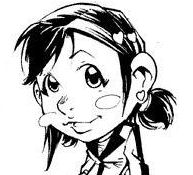 The fist real girl main character and Keiji's little sister. She's in love with Hongo but can't bring herself to tell him since she's so shy. She haves problem to express herself, but she's really good at acting. She goes berserk when something goes really wrong, when someone steals her stuff, even more when Hongo is involved. She wears a green Jacket. 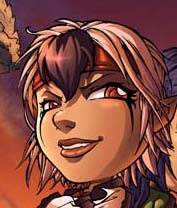 Stratequerre's daughter, arrived late (volume 4). A brat that pretends to be nice just to put her dad on edge. So she's in Sentai School instead of Villain School, and is Bibi's close friend.

From the countryside. Koji never wanted to live in a farm, his destiny was to become a hero, so he went to Sentai School with his pet Chibi-Zinger. Koji tries to always do everything better than everyone, but that doesn't seems to work with Duke. Just never tell him he's a countryman or he'll be real pissed.

Being a rebel is his life, Guy lives to be differents. He refuses to do like anybody would do. The guy didn't even cry watching "Grave of the Fireflies". But he thinks he found his master with Ken, so he went to Sentai School to watch him. Has he says "Better be a rebel with the good guys than with the bad guys."

Tropes associated with Guy The Cobra:

Hongo Wing's brother. Former gang leader who became a teacher.Hongo is ashamed that he doesn't use his badassery potential.

his name means "Tofu The Wonderful". Tofu incarnates the ideal man dreamed by all the women. Ridiculously rich, handsome, singer, actor, high level sportsman. He's narcissist, arrogant and doesn't move without a buch of bodyguards. He lived in nobility, he's elegant and refined. But when he's pissed he duel the one who pissed him, in an antique fashion.It is precisely by defying Hongo Wing that he unleash the fury of Bibi who proceed to the beat living shit out of him. Impressed by the young girl, Tofu falls deeply in love with her and can't stop following her wherever she goes. He's sure that Bibi loves him too.

Founder headmaster of the Sentai School and friend of Ultra-sama.

Richard Ultra aka Ultra-sama. He's the headmaster of Sentai School and a former hero. The 5 man band of the Sentai School is his main nightmare cause they can't stop blowing up the school. Between the invoices, the insurances inspectors and the schemes of his eternal rival, Stratequerre. Poor Ultra-sama can't get a break. That doesn't prevent him from trying to get things in control. Even though he hates his rival Stratequerre, Ultra and him have already showed a deep frienship before the war starts again. In this case, both of them can't control themselves.

Vice Headmaster and Main teacher of the heroes in their 1st year, he's the butt monkey of the heroes, most of the time. Despite this, that doesn't prevent him from defending them in front of Ultra Sama. He haves high regards about teaching and his role.

Head of the school conseling and hot blooded feminist, she goes angry at everything. She can do everything in the school and Ultra Sama doesn't like her very much. She was the one who opened the school to girls and saved the school by doing so. She had her own TV Show but this was canceled after she beat the shit out of the producer, ( She says it's for the sake of teaching )

Kenshiro of the Otaku

The Janitor of the Sentai School, cleaning the garden and other stuff. His hands are enough for him to do his job. He haves a lot of cousins who looks exactly like him. He's friend with Onizoku Wing. Kenshiro lives to finds Yuria, his lost love. He's Hot Blooded and seems to get angry pretty fast, but he's very sensitive. His Fighting Style, The Otaku, derived from Hokuto, is deadly. He uses it mainly to cut trees and stuff while shouting manly "ATATATATATATA WATCHAAA !"

Badassery Teacher of the Sentai School. His room is often dark and he doesn't like when people are moving his stuff. Cousin of Dr Black Jack.

Badass Cape Teacher. He leaves the school to teach in Villain School in the middle of 1st year finals. Because of this, everyone passed their badass cape exam effortlessly.

Fighting Teacher. His over starched Kimono prevents him from taking any other stance than the one he's already taking. Totally expressionless and his look is creepy. He teaches Fighting Arts to students.

Saori teaches to woman how to make a perfect target for villains.