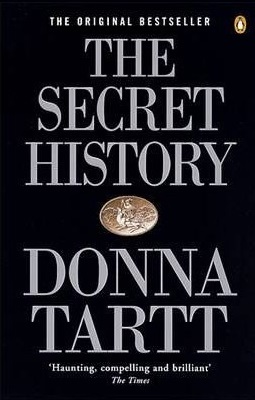 "Death is the mother of beauty," said Henry.
"And what is beauty?"
"Terror."
Advertisement:

"I hope we're all ready to leave the phenomenal world, and enter into the sublime?" So says Julian Morrow, the charismatic and eccentric Classics professor at Hampden College. The six students whom he accepts into his classes receive an education apart from any other at the college: in studying Latin and Greek, they mimic an ancient Athenian way of thinking and living. They are:

Their search for the sublime leads them, inevitably, to a collision with the real world. Left to deal with the consequences of an accidental murder, the group slowly starts to plan a deliberate one.

If you want to know where the film rights to The Secret History are, they have apparently been in Development Hell for about two decades. Not related to Secret Histories by Simon R. Green, The Secret History, a French comic book by Jean-Pierre Pécau, or the Secret History by Procopiusnote A rather nasty and spectacularly exaggerated tell-all account of the Byzantine Empire during the reign of Emperor Justinian(after which all of these are directly or indirectly named).