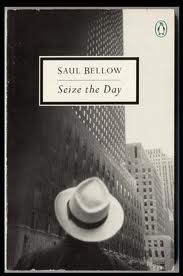 Oh, this was a day of reckoning. It was a day, he thought, on which, willing or not, he would take a good close look at the truth.

A novella by Nobel-winning writer Saul Bellow, Seize the Day (1956) tells the story of Tommy Wilhelm and his father Dr. Adler, who both live in a large city, brood over their life, and struggle with the problems which they have with each other. Much place is devoted to the philosophical views expressed by Tamkin, an experienced stock player who became a sort of father figure for Tommy. (The book is in no way connected with Joyce's Ulysses.) The plot concentrates on the attempts of Tommy to get a sufficient amount of money to put things in his life in relative order. However, as this is a realist novel, further problems ensue - and the reader is not told whether this is due to Tommy's childishness, Adler's indifference, or the overall condition of contemporary society.