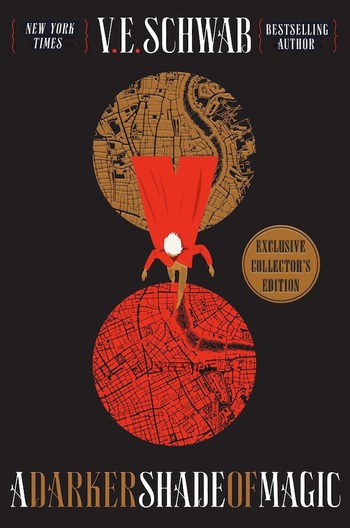 Shades of Magic is a fantasy trilogy by V. E. Schwab. The first book was released on February 24, 2015. A sequel trilogy to Shades of Magic called Threads of Power was announced, and its first installment will be published in 2019.

There is also a prequel comic series called Shades of Magic: The Steel Prince which follows Kell and Rhy's father Maxim as a young man. The first issue was published on October 10, 2018; a bind-up of all issues was released in February 2019.

The series itself focuses on the antics and life of Kell, who is part of a dwindling species called Antari, who have the power to travel between dimensions, each having a separate London. Red London, ruled by the Maresh dynasty and Kell's adopted parents, is full of magic. Grey London is our ordinary world. White London is so drained of magic its people are slowly starving to death. And Black London is forbidden, after a terrible magical cataclysm that killed everyone there. Kell secretly smuggles objects between the worlds, thinking it a harmless sideline to his real business of maintaining political ties between the different royal families. But then someone pushes a mysterious black stone on him...

Alternative Title(s): A Darker Shade Of Magic, A Gathering Of Shadows, A Conjuring Of Light