Literature / Shades of Milk and Honey 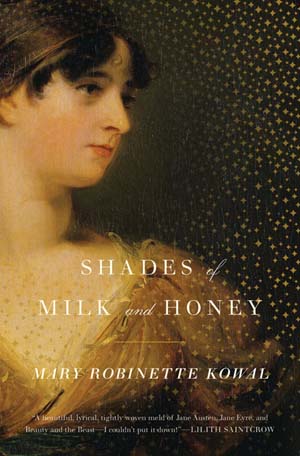 What is talent without beauty?
Shades of Milk and Honey is a Regency Fantasy novel by Mary Robinette Kowal, written as a loving Homage to Jane Austen. Its only fantasy element is the ability to create "folds" of illusion, at the expense of some exhaustion. It tells the story of Jane Ellsworth, a young woman in the mold of a sensible Austen heroine, who possesses a high degree of skill in illusion, as well as music and the other "accomplishments" of Regency England. Her sister, a specimen of much less maturity (both in years and wisdom) provides much conflict, of the familial and romantic variety, as suitors dance about both girls. The plot thickens when certain secrets come to light...and when certain emotions come into play.
Advertisement:

First in The "Glamourist Histories" series, Shades (2011) is followed by Glamour in Glass (2012) which delves into Napoleonic intrigue, marital tension and reconciliation; Without a Summer (2013), mixing Emma with Industrial Revolution riots; Valour and Vanity (2014), a Jane Austen caper yarn in the vein of the Ocean's Eleven series and Of Noble Family, (2015), dealing with race relations and slavery.