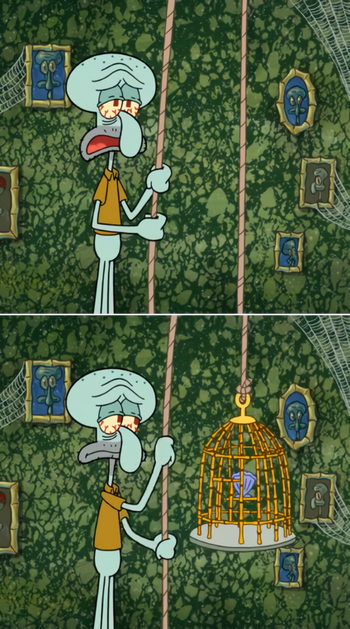 "Maybe this will help..."
"Wait, what's she doing? Rose... what are you...? She's not gonna jump off? Whaaat?"
— YouTuber SebScreen doing a Reaction Video for Titanic
Advertisement:

You ever thought a character was about to commit suicide, only to find out they were doing something completely different?

If yes, you've fallen for a Bait-and-Switch Suicide.

This trope is mostly used for dramatic effect in that it's a Bait-and-Switch where a character is seemingly about to kill themselves but does something else entirely.

The effect can be relieving or disappointing, depending on whether the character in question is a protagonist or antagonist.

Compare Bait-and-Switch Gunshot. May overlap with Mistaken for Suicidal if people in-universe were fooled as well. Will usually cross over with Suicide as Comedy. See also Suicidal "Gotcha!", a subtrope in which a character jumps off a ledge before being saved. Contrast Interrupted Suicide, in which a character is planning to commit suicide but gets interrupted.