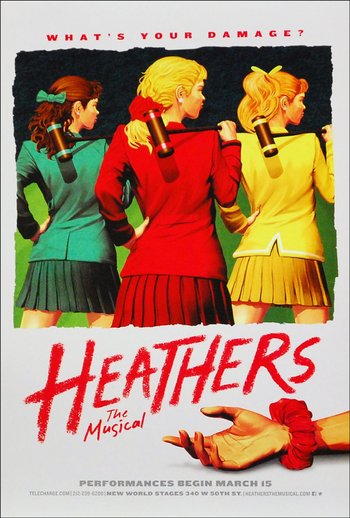 But I know, I know...
Life can be beautiful...
"September 1st, 1989. Dear diary: I believe I'm a good person. You know, I believe that there's good in everyone, but... here we are! First day of senior year, and, uh... I look around at these kids I've known all my life and I ask myself, what happened?"
— Veronica Sawyer
Advertisement:

Heathers: the Musical is a rock musical adaptation of the 80s cult classic Heathers.

Veronica Sawyer is a wry, clever outsider at her school Westerberg High, which is ruled by the Girl Posse the Heathers. Veronica, in an attempt to win favor with the Heathers, forges a hall pass for them, and, almost entirely by accident, becomes In with the In Crowd. However, being part of the Heathers turns out to be the exact opposite of what Veronica wanted. The Heathers belittle and shun any outsider, including Veronica's best friend Martha "Dumptruck" Dunnstock, and the new guy in town, Jason "J.D." Dean, whom Veronica falls for almost instantly. Veronica attempts to resign from the Heathers, but the Alpha Bitch, Heather Chandler, refuses to make things that easy, and promises to ruin what little is left of Veronica's social life. Veronica tries to apologize, and goes over to H. Chandler's house with J.D., where H. Chandler insists Veronica makes her a hangover cure. J.D. "jokingly" suggests putting drain cleaner in it, and pours it into a cup. Veronica accidentally grabs the toxic cup, and as soon as Heather Chandler ingests the "hangover cure," she dies. Veronica is shocked, and J.D. suggests they forge a suicide note to cover their tracks. However, as the bodies start piling up, Veronica realizes Heather Chandler's death may not have been as much of an "accident" as he claimed.

The musical premiered in 2010, and was revived in 2014, both Off-Broadway. There is an official cast recording, with Barrett Wilbert Weed as Veronica and Ryan McCartan as J.D. The creators are trying to get the show a Broadway run and a national run, and there are talks of a film adaptation as well. It had a run on the West End in London in 2018, with a few song updates, and later got its own cast album.

The musical is also getting a fanmade Web Video adaptation called The Veronica Exclusive, framed as Veronica's video diary. The plot is the same, except set in The New '10s, and making J.D. a girl.

The three Heathers attempt to convince Veronica to prank Martha

The three Heathers attempt to convince Veronica to prank Martha