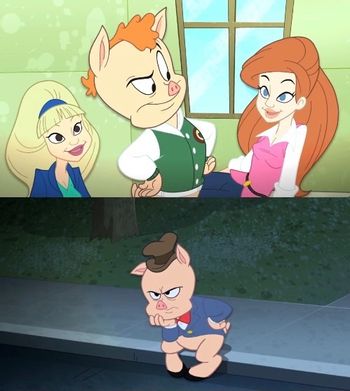 Above: Porky Pig in high school.
Below: Porky Pig now.
Where do the years go...?
"Doing manual labor for a geek we used to make fun of? This isn't supposed to happen until we're, like, 30!"
— Dash, Danny Phantom, "King Tuck".
Advertisement:

The Big Jerk on Campus who makes The Protagonist's life impossible presumes that his popularity and success in the academic world will translate into success in business, sports, and politics, and everyone else will be there to lick his boots.

Through the magical agency of Time Travel, prophetic dreams or a nearby example of Retirony, we (and occasionally he) find out they'll become a broken shell of a man whose life has been reduced to menial jobs and is the target of constant derision or, worse, being forgotten. Often he endlessly laments his Glory Days because, for once, high school really was the Best Years of Your Life.

If this leads to an epiphany, expect it to be short-lived, since We Want Our Jerk Back!, regardless of how doomed it will make his future. If it sticks, expect a gradual shift into Jerk with a Heart of Gold. Usually The Protagonist will be the one to get the epiphany, and try to sympathize with or treat the Jerk Jock better (this doesn't last long either, but may lead to an Odd Friendship or understanding). If any Character Development happens, expect it to be subtle and far-reaching.

Sometimes given a twist with the character who seems to have it all made and be on the fast track academically becoming the loser. (This is an Inverted Trope, Not a Subversion.)

If taken to extremes, the writer may be working out issues or giving a Take That! against Dumb Is Good.