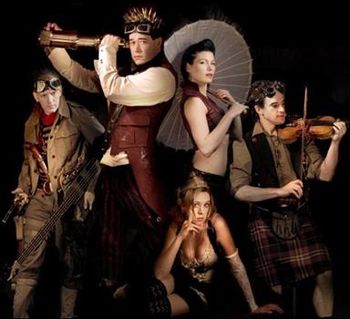 Abney Park comes from an era that never was, but one that we wish had been.
"We tried to make a buck, but we could barely stay aloft
Tried swinging a deal, but we pissed the wrong guys off
With a clockwork guitar, and a flintlock bass
We're blasting the past all over the place—
And now there's nothing left but Post-Apocalypse Punk!"
Advertisement:

Abney Park is a Seattle-based steampunk band that mixes elements of industrial dance, and world music influences in their work. The band has a steampunk theme that they incorporate in their instruments, music, outfits, and even their own studio, which is actually pretty awesome. Really, is there more that needs to be said?

The band also produces an award-winning Role-Playing Game called Airship Pirates, and has published a Tie-In Novel of stories set in their backstory universe entitled "The Wrath of Fate."

And probably every other steampunk trope.