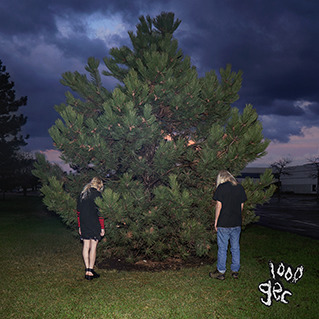 1000 gecs is the debut album by experimental music duo 100 gecs, composed of Dylan Brady and Laura Les. Self-produced and released through Brady's Dog Show Records on May 2019, the album reached mass notoriety throughout the Internet thanks to its unabashedly surreal nature.

Picture someone taking every genre a teenager in the 2000s/2010s would've obsessed over, along with a considerable amount of crack, and throwing everything into an industrial-grade blender at its highest setting, and you have an idea of what this album sounds like.

More descriptively, it utilizes those genres (brostep, nightcore, emo rock, third wave ska, etc.) and refracts them through an extremely glitchy, saturated sound that's been dubbed "hyperpop", with autotune-drenched vocals singing lyrics depicting bizarre stories or paying homage to the angsty songwriting tropes of some of the aforementioned genres, either humorously exaggerating them or playing them straight to a weirdly melancholic effect.

Critics were notably receptive to the album, with it making a number of year-end lists, but as you may suspect, public opinions were considerably more interesting, especially following the album's instantaneous assimilation into meme culture, especially on the back of its lead single "money machine", which brought a lot of attention from general audiences to the album and band as a whole.

Reactions to 1000 gecs can generally be split into three camps: those who dismiss it as gimmicky garbage that labors to be as obnoxious as possible, those who aren't fond of it but listen to it from an ironic perspective, and those who genuinely enjoy it in all of its insanity — for very similar reasons as those who hate it — and maintain that it's a listening experience well worth your time.

A Remix Album titled 1000 gecs and the Tree of Clues was released in July 2020, featuring collaborations from acts including Charli XCX, Kero Kero Bonito, Rico Nasty, Fall Out Boy, Tommy Cash, Hannah Diamond, and Dorian Electra. In addition to the remix tracks, the digital release of the album comes with new original songs played and performed in the interim between the original and remix albums.