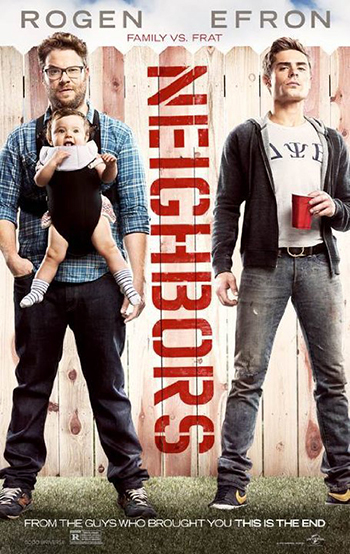 Neighbors (known as Bad Neighboursnote with a u outside of the U.S. in English speaking countries, for reasons) is a 2014 comedy film directed by Nicholas Stoller. It stars Seth Rogen, Rose Byrne, and Zac Efron.

Mac and Kelly Radner (Rogen and Byrne) are a married couple with a newborn baby, and they find that raising a child has cut into their social life. Things become more complicated when a fraternity led by Teddy Sanders (Efron) moves in next door, causing much trouble for the couple.

Not to be confused with the 1981 film starring John Belushi and Dan Aykroyd, the 1920 Buster Keaton short, Norman McLaren's 1952 stop-motion short, an Australian soup opera, a 2012 science fiction sitcom, or a 2015 Tommy Wiseau sitcom.