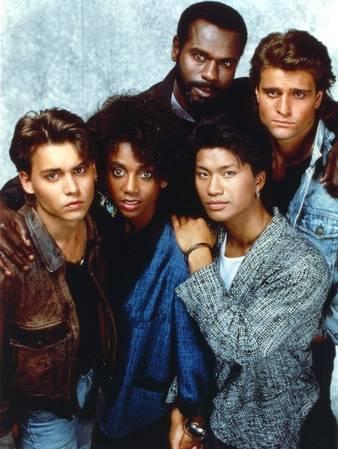 "..You'll find you'll need us, 'cause there's no one else to call..."
Advertisement:

21 Jump Street was the Fox Broadcasting Company's first drama, and was part of its' inaugural season along with sitcoms Married... with Children, The Tracey Ullman Show, Duet and Mr. President.

It is about a special undercover police unit in an unnamed American city, where young-looking police officers infiltrate schools to investigate youth-related crimes. In the earlier seasons these were high schools, later they increasingly went into universities and other non-high school settings.

The series made Johnny Depp a star, but a Teen Idol was the last thing he wanted to be. He quit at the end of season 4, the series carried on for one other season (the 5th) after this, and then got cancelled.

Had a spinoff series, Booker, which ran for one season from 1989 to 1990, following the character of Dennis Booker.

Due to the drastic difference in tone and contradiction of the show's continuitynote Tom Hanson and Doug Penhall die in the movie (reportedly Johnny Depp himself demanded his character to die in the movie as a condition for accepting his cameo role) being middle-aged, working for the DEA in 2012, while in the Back from the Future episode of the series, they are shown to have lived to be very old men in the 2030's after quitting police work, the movie is not necessarily recommended for fans of the series.

Compare The Mod Squad, a 1960s police series about young outcasts using their hippie personas to work as undercover detectives.