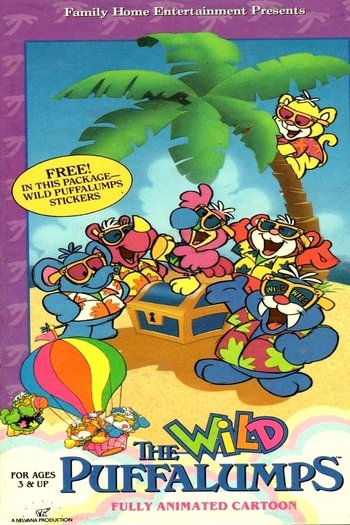 Debuting in 1988, The Wild Puffalumps is an animated special animated by Nelvana, based on the 1980s toyline of the same name.
Advertisement:

The special focused on two children named Kevin and Holly who, after moving into their new house, find an old map in an attic that leads them to a place called the Isle of Wild. Once the two children arrive at the island, they are met up with a whole host of multicolored creatures called Wild Puffalumps. The Puffalumps that they meet on the island consist of Toucan, Elephant, Walrus, Monkey, Tiger, Rhino, and Panda. The special focused on a race to find the buried treasure hidden on the Isle of Wild, with Kevin joining up with Elephant, Walrus, and Tiger, and Holly joining up with Toucan, Monkey, and Rhino. After reaching the site of the treasure, Panda is able to remind both teams that they both win and, working together, the group digs up the treasure, which is revealed to be sunglasses for Kevin and Holly. At the end, the whole experience seemingly turns out to be all just a dream, until Kevin and Holly realize that they're still wearing the sunglasses that they received.

The special was also notorious for the fact that whenever any of the Puffalumps uttered the word "Wild", the lenses of their sunglasses would always flash the world "Wild".

Tropes found in The Wild Puffalumps include: