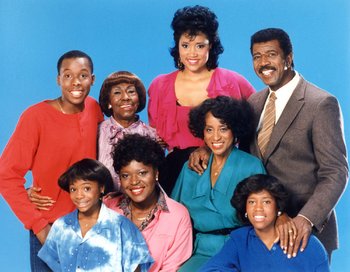 "I mean no place, child."
Advertisement:

227 (1985–90) was a sitcom on NBC starring Marla Gibbs as Mary Jenkins, resident of an apartment building in suburban Washington, DC. Also starring on the show were Hal Williams as her husband Lester, and Regina King as daughter Brenda. Other residents of the apartment were Mary's friends Rose (Alaina Reed Hall) and Pearl (Helen Martin), as well as Mary's nemesis Sandra (Jackee Harry).