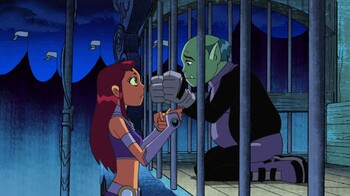 Get your tissues ready, it's one of those episodes...
Starfire: On my world, Rekmas means "The Drifting," the point in which close friends begin to drift apart... and their friendship begins to die...
Cyborg: Aw, c'mon, Starfire!
Beast Boy: We are so not Rek-whatevering.
Raven: We're getting on each other's nerves a little. Big deal.
Robin: Yeah, this is just...typical roommate stuff. We're not going to drift apart, Star. I promise. We'll all be friends forever.
Advertisement:
Starfire: Forever?

The depressing one. Featuring Nightwing!

Starfire notices all her friends arguing and tries to call their attention to it out of fear that they might be drifting apart. Then, in a fight with a time-travelling thief, Starfire gets sucked into the future, where her fear has come true. Cyborg is confined to Titans Tower due to his final battery giving out, and him having to remain plugged into the tower's power source at all times. Beast Boy has become afraid of everything, locking himself in a cage to keep passersby away. Raven has lost her mind, believing herself to be hallucinating Starfire when she tries to visit. Finally, Starfire runs into Nightwing, who helps her figure out how to get back to her time, and reforms the (no longer Teen) Titans.

"Please... must this really be our future? Is there nothing I can do to change it?"