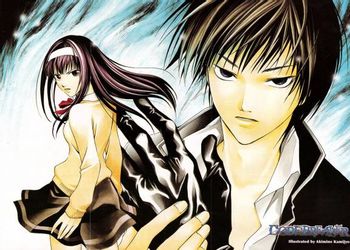 Ogami and Sakura
"An eye for an eye, a tooth for a tooth, and evil for evil."
—Rei Ogami
Advertisement:

Code:Breaker is a manga series by Akimine Kamijyo (the creator of Samurai Deeper Kyo) which ran in Weekly Shonen Magazine from 2008 to 2013. It was adapted into a 13-episode anime in 2012.

Riding the bus one day, Sakurakouji Sakura looks out the window to see people being burned alive with a blue fire and a boy her age who's unharmed and standing over the people. She comes back to the site the next day and there are no corpses or evidence of any kind of murder, just a small fire. She then goes to class to find there's a New Transfer Student who looks exactly like the boy she saw before and wears a black glove only on his left hand. Later she finds out that he is the sixth "Code:Breaker", a special type of assassin with a strange ability, who is only a member of a secret organization that serves the government.