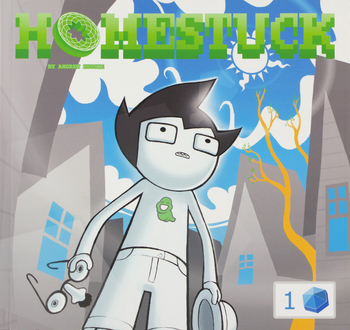 Voice acting troupe Voxus is in the process of dubbing Homestuck, and as of April 2021 the project has reached Act 6 Intermission 4.

that they had acquired Homestuck in addition to their plans to publish the comic in book form. Webcomic merchandising company TopatoCo had previously attemped to do the same, but ultimately only published the first three acts. As of March 2020, the VIZ book series has reached Act 5 Act 2 Part 2.

Note: with the end of Flash on internet browsers, Homestuck is no longer accessible online in its original form (most Flash content has been replaced with low-res videos). However, a fan known as Bamboshu has made a fully functional, downloadable version available here

, which has been endorsed by Hussie.

Late-Arrival Spoiler Warning: Homestuck is an enormous, deeply complicated story that features rapid plot developments. Additionally, it features a cast of characters filled with walking spoilers that have become ubiquitous in the story, and a majority of the story's seemingly minor events, themes and jokes themselves constitute or foreshadow what were originally major twists. Therefore, all spoilers for Homestuck have been left unmarked. Homestuck is freely available in its entirety, and there are no barriers to reading. To fully enjoy the experience, it is highly suggested you read the whole comic before visiting any of the following links.note Well, except the Laconic link. You Have Been Warned. Good luck.

> Weigh in on subjective matters.

Jack Noir dons his kingdoms ring of power and slaughters the Dersites and Prospitians almost to a man. He then fights Bro, the comics best swordsman at the time, to a standstill.

Example of:
Knight of Cerebus

Jack Noir dons his kingdoms ring of power and slaughters the Dersites and Prospitians almost to a man. He then fights Bro, the comics best swordsman at the time, to a standstill.