As a Homestuck page, all spoilers related to the main comic will be unmarked. The Paradox Space spoilers will be unmarked too, since it's freely available and there's no barrier to reading it. 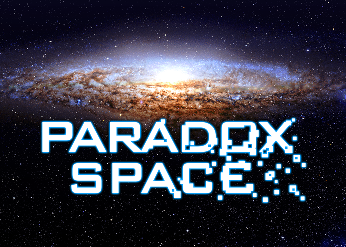 There's nothing wrong with an alternate universe where everyone's a little happier.
Those who like [Homestuck] are extremely fond of the characters, yet those characters are trapped — "stuck" if you will — inside a very particular narrative, which itself has been at the mercy of my ability to produce it. So when I think about the future of Homestuck, I envision projects which liberate the things people love about it from the story itself, and most importantly, from my intensive personal effort. So this website is the first major step in that direction.
— Andrew Hussie, introductory news post.
Advertisement:

Paradox Space is a Spin-Off of Homestuck, updated every weekday. A webcomic anthology, it was launched on 4/13/2014, Homestuck's fifth anniversary, as a surprise for the Homestuck fandom, and motivated by the desires of Andrew Hussie to ensure that the world of Homestuck wouldn't be completely limited to what he had the time and energy to create. It can be found here.

Paradox Space itself is composed of short stories with no overarching narrative, by various artists and writers working in tandem. Some of them are "possibly canon" to the main story of Homestuck, depicting takes on off-screen events alluded to in-comic or new tales plausibly set somewhere in the original comic's timeline, while others are decidedly non-canon and set in "doomed timelines", alternate scenarios, or simple silly situations featuring Homestuck characters.

The following stories have been told so far (with writers and artists noted):