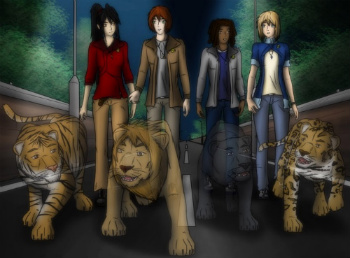 follows the unexpected adventures of Taylor Quinn, new freshman at Bridgedale High School in Massachusetts. Most students have a rough time transitioning to high school - pop quizzes on day one, cafeteria food, gym class, and the like. Well, Taylor gets lured in to (more like abducted by) the special club her brother Jason is in, only to find it's a group of teens given the power to transform into big cats (as in lions and such, not oversize house cats, mind you) with control over the classical elements. Including herself now, apparently.

The group is led by BHS's chemistry teacher, Mr. Richard Reynder, whose past work at a chemical company apparently led to a massive (and inhumane) experiment, which has support from the government, (and also to his ability to give the teens their powers,) which he tasks Panthera with trying to stop. So Taylor, Jason, Jason's hot-tempered girlfriend Kira, and the easy-going quick-witted sophomore Fletcher find themselves, in panther form, on the wrong side of the FBI's guns.

But what happens if the cats get connected back to the kids?

Not to be confused with the band Pantera.