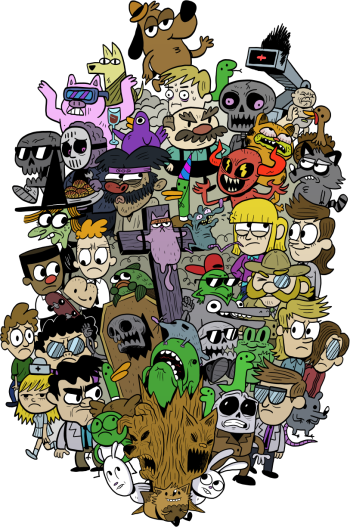 "This is fine. I'm okay with the events that are unfolding currently. That's okay. Things are gonna be okay."
Advertisement:

is a web comic made by KC Green. Starting off as a small gag a day strip, the jokes became more complicated over time. Over time it has developed a spanning continuity, with some recurring characters such as the Anime Club (who now have their own page!), The Rabbits and The Hairy Criminal. There is also Graveyard Quest, a story arc that has its own page. However it still remains a largely a gag a day comic, with the continuity being mostly composed of Mythology Gags.

The comic was discontinued Christmas of 2014. Two years later, ten strips were animated in the form of station idents

on Adult Swim. KC currently writes BACK, writes and draws He Is a Good Boy, and draws an adaptation of

The Adventures of Pinocchio.

But let's be honest. You're probably here for the "This is fine" dog, aren't you? Naturally, his strip was one of the aforementioned station idents

, voiced by none other than Dana Snyder.

A station ID for Adult Swim featuring the memetic "On Fire" strip from Gunshow.

Example of:
Obviously Not Fine

A station ID for Adult Swim featuring the memetic "On Fire" strip from Gunshow.