Manga / The Enigma of Amigara Fault 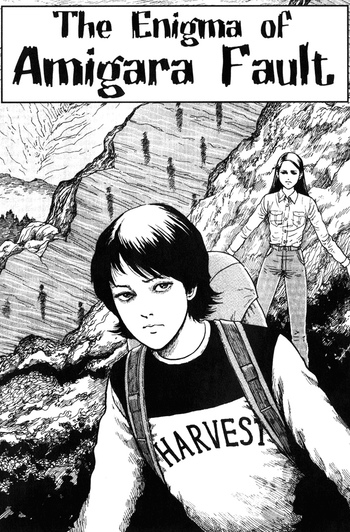 "This hole...! It was made for me!"
Advertisement:

A short horror manga story by Junji Ito. A boy named Owaki, and a girl, Yoshida, meet on Amigara Mountain, where an unsettling discovery has been made. An earthquake has created a huge fault in the mountain, and human-shaped holes are scattered across the face of the fault line. It soon becomes clear that the holes are "calling" to the people they are shaped like. So what happens when they enter the hole? Well, you can be sure that massive amounts of claustrophobia and Nightmare Fuel are involved.

The story was originally printed as a bonus one-shot alongside his fish-zombie-apocalypse manga Gyo, and was reprinted in the short story collection Venus in the Blind Spot.