Webcomic / Beyond the Canopy 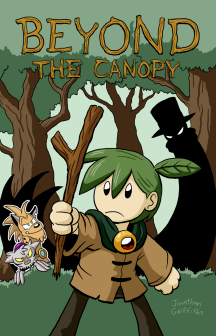 "Maybe all I need is one little push..."
Advertisement:

Life for Glenn in the Canopy Woods is a constant struggle between yearning for adventure and getting away from his insufferable grandpa. One day, however, Glenn sees a hyena, an owl and a nasty-looking gentleman heading into the one place he is forbidden to go: the Forest's Navel. After fighting a skeleton army and accidentally acquiring the Remnant (a stick), Glenn gets dragged along into one heck of a wild ride.

Beginning in early 2009 by Jonathan Griffiths (better known as greliz on deviantART), Beyond the Canopy can be found here