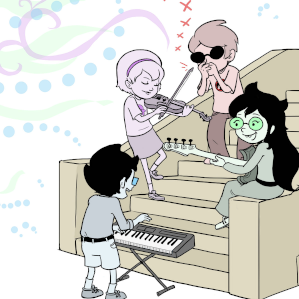 You shut up and jam to some incredibly delirious biznasty beats, yo.

All the songs are awesome. All of them. We aren't joking. This is Serious Business.

Fan music has its own Awesome Music page.

~Side 1~Both the albums have songs that had originally different names, and sometimes were assigned to another character. These are noted.

Universe B in general is a much more energetic and upbeat album, which seems to have made it much more endearing to the fans than the relatively orchestral Universe A.

Symphony Impossible to Play
One Year Older
Genesis Frog
Cherubim
[S] Collide (EOA6)
Act 7
Volume 10
Really it would be simpler to say "the whole album", but a few stand out.
Not Yet Released
Unsorted Examples
> Return to Music page
> Return to Main Page