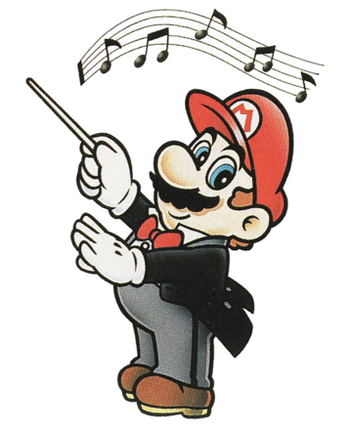 And now the maestro is approaching the podium... He raises his baton, and we hear... DOO DOO DOO, DA-DOO DOO! BOM!
Advertisement:

Besides that classic tune that you're probably hearing in your head right now, the most well-known game franchise in the world has some pretty damn good tunes under its belt.

Main series games with their own pages:

Spinoff series with their own page:

Sports games with their own pages:

For spinoffs not starring Mario, see:

This game's soundtrack stands out because almost none of it was used in later New Super Mario Bros. installments; the vast majority of tracks from this game were dropped entirely, and the few that did get reused were all rearranged and remixed starting with NSMBWii. A real shame, because there are several great tracks in this mix: