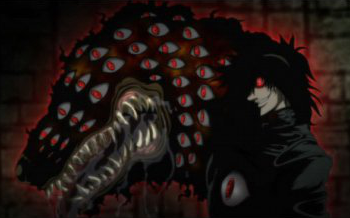 A character who, despite (or precisely because of) being Nightmare Fuel, is also greatly loved by a series' fandom. This can have a variety of reasons. Maybe the character is simply the biggest badass in the show, or maybe they have a cute, funny or tragic side in addition to their creepy side that endears the character to the fans. The character in question need not be a villain, though a majority of characters this trope applies to are villains or at least antagonists of some sort.

This sometimes results in Misaimed Fandom and Draco in Leather Pants. Note that while these characters are often Nightmare Fuel incarnate, their appeal to non-Nightmare Fetishists is often due to being more appealing (e.g., Magnificent Bastard, The Woobie, etc.) than creepy. May or may not overlap with Creepy Good. Love to Hate runs on a similar principle, and given that many examples of creepy characters tend to also be evil, the two tropes can easily overlap.