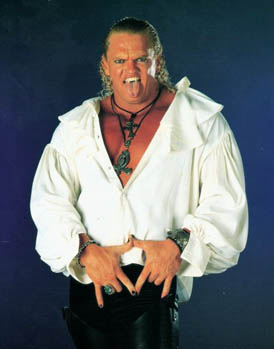 David William Heath (born February 16, 1969) is an American Professional Wrestler from Fort Lauderdale, FL best known for his work in various independents in the 1990s as Vampire Warrior and in WWE from 1998-2001 as Gangrel. He debuted in 1988 in the Florida independent scene before going on to Stampede, Herb Abrams' UWF, All Japan Pro Wrestling, the USWA, the National Wrestling Alliance and ECW. He made his PPV debut as Apocalypse of the Black Harts, teaming with Destruction (Tom Nash) in a victory over Fire Cat and Jim Cooper at UWF Beach Brawl, June 9, 1991. He debuted in WWE on the August 16, 1998 WWF Sunday Night Heat. In October, he, Edge and Christian formed The Brood. They feuded with the J.O.B. Squad before surprising a lot of people by joining The Undertaker's Ministry of Darkness. They later split from the Ministry, with Edge and Christian eventually going on to bigger and better things. Gangrel tried replacing them with the Hardyz as The New Brood, but they broke away from him after defeating E&C in a ladder match at WWF No Mercy in October 1999 to win Terri Runnels' Terri Invitational Tournament. Gangrel floundered in the midcard before being quietly released. He has regularly competed in the independents ever since. Among his in-ring achievements, he is a former USWA Heavyweight Champion

as Apocalypse of the Black Harts with Destruction (Tom Nash).

"The tropes of Gangrel flow through you!":