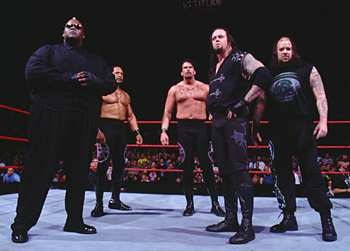 L-R: Viscera, Faarooq, Bradshaw, The Undertaker and Mideon
"Accept the Lord of Darkness as your savior. Allow the purity of evil to guide you."
— Undertaker's Ministry of Darkness entrance theme
Advertisement:

The Ministry of Darkness was a Power Stable in WWE during the Attitude Era. It was a cult led by The Undertaker. The cult abducted people and perform sinister "rituals" on them, and turned a few wrestlers into new followers.

It started in October of 1998 when The Undertaker reunited with his former manager Paul Bearer and turned against his brother Kane. Undertaker referenced a "Ministry of Darkness" and admitted that he started the fire that killed his own parents and burned Kane because Kane was weak. Taker continued feuding with Kane as well as "Stone Cold" Steve Austin. During his feud with Austin he tried performing cult-like rituals on him and even killing him. Undertaker's threat was seemingly ended when Austin and Kane buried him alive.

That turned out not to be the case. Bradshaw and Faarooq (a.k.a. Ron Simmons), as the Acolytes, kidnapped Dennis Knight, and it was revealed that they were now henchmen of the returning Undertaker, who performed a ritual and Knight became "Mideon" and a new member of the Ministry. That same night Undertaker announced his plans to conquer the WWF. They later did the same with Mabel, who became Viscera, and the Brood (Gangrel, Edge, and Christian) joined as well.

It was then revealed that The Undertaker's goal was to take control of the WWF from Vince McMahon, starting a feud with The Corporation, as well as reveal that he was taking orders from a "Higher Power". The Ministry then threatened Vince's daughter Stephanie, prompting Vince to go into Papa Wolf mode and eventually a Heel–Face Turn. The Ministry then abducted Stephanie and The Undertaker attempted to marry her, but this was thwarted by Vince's own Arch-Enemy, "Stone Cold" Steve Austin. After this it was revealed that Vince's son Shane (who had taken over the Corporation) was in cahoots with The Undertaker the whole time, and the Corporation merged with the Ministry to become the Corporate Ministry. It was then finally revealed that the "Higher Power" who masterminded the whole thing was none other than... Vince McMahon, and it was all part of a plan to get the WWF World Heavyweight Title

off of Austin once more. note  Vince wasn't planned from the beginning to be the Higher Power, as should be obvious. The twist was due to no one else really being able to fill the role at the time but Vince. One possibility was to have Mick Foley be the Higher Power, but he backed out.

The Ministry collapsed after Vince was "banished" from the WWF when Steve Austin was appointed CEO of the company by Linda McMahon, though a few members continued to follow the Undertaker until he took time off to heal injuries, then came back with his Biker gimmick. The Brood ultimately went their separate ways to varying degrees of success, and the Acolytes continued to exist as a tag team in the form of the APA (Acolyte Protection Agency) for a few more years. However, the group briefly resurfaced in 2004, when former member Bradshaw (now called John "Bradshaw" Layfield with a Rich Bastard gimmick) hired Gangrel and Viscera to attack the Undertaker. They were simply known as The Ministry. They didn't last long at all, as The Undertaker took both of them out quickly, though Viscera did linger on for a time before changing his gimmick. Undertaker referenced the gimmick again a couple weeks later by making a sacrifice of Orlando Jordan on his symbol to play mind games with JBL.

"Accept the Tropes of Darkness as your saviors":