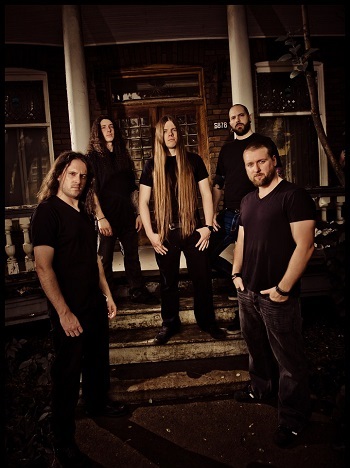 "You do that rather well...Don't you think?"
— Beginning of "Crown of Horns"
Advertisement:

Cryptopsy are a Canadian Technical Brutal Death Metal band, originally under the name Necrosis in 1988, by drummer Mike Atkin, guitarist Steve Thibault and vocalist Dan Greening (nicknamed "Lord Worm" because he would dig up and ingest worms on stage). In 1992, after a few recordings of their demos, they changed the name to Cryptopsy in 1992.

By 1994, bassist Kevin Weagle had been replaced by Martin Fergusson, and Dave Galea left and was replaced by lead guitarist Jon Levasseur. This line-up recorded their debut album, Blasphemy Made Flesh, originally independent was licensed to a now-defunct label. The album was met with acclaim in the underground Canadian Scene.

In 1996, they released the legendary None So Vile, with Levasseur being the main songwriter. To this day, the album is recognized as a blueprint of Technical Death Metal. Despite the success with the underground, Worm left, partially due to musical differences and to pursue his career as an English Teacher. Vocalist Mike DiSalvo became his replacement for Whisper Supremacy and ...And then You'll Beg, both under the more popular Century Media. After a few tours, DiSalvo left to spend more time with his wife and daughter. The Live ablum had Martin Lacroix on duty. Because of his poor English, he was unable to contribute lyrics .

Worm came back in 2003, with Levasseur leaving due to loss of interest in 2005. Alex Auburn did guitar duties on Once Was Not. A followup, originally named The Book of Suffering was planned to be a double album, but Worm had left again due to health reasons, though the rest of the band says he was fired. in 2007, 3 Mile Scream Vocalist Matt McGachy was the replacement. The Unspoken King was released in 2008, and is deemed their most reviled album to date even today.

On May 25, 2011, the band announced on their official Facebook page that former lead guitarist and major contributor Jon Levasseur returned to the band. Additionally, bassist Eric Langlois decided to take a break from Cryptopsy, and Youri Raymond took his place on bass. On December 9, 2011, Raymond announced his departure from the band. Cryptopsy released their Self-Titled Album on September 14, 2012, returning to their old sound, with McGachy's vocals being highly improved.

As of 2015, they have announced a Kickstarter campaign for The Book of Suffering: Tome 1, the first EP in a series to come.

Tropes Displayed By this Band:

Go Ahead and Run! RUN HOME AND CRY TO MOMMA!!!