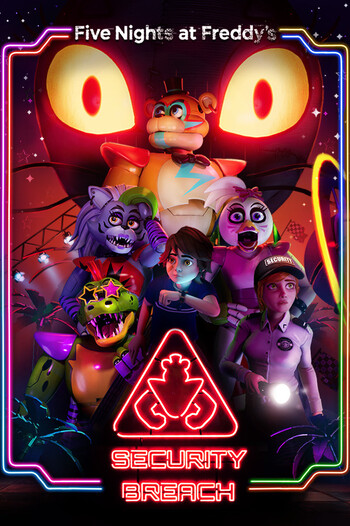 After apparently managing to brush off the murders at the previous locations thanks to the help of the virtual reality experience, Fazbear Incorporated has successfully funded and constructed a huge building known as "Freddy Fazbear's Mega PizzaPlex", which, in essence, is an entire indoor amusement park. While being inside during closing hours in such a place may seem like a fun time, for the child protagonist we play as it's anything but, as he's being hunted by Vanny, a woman who seems to want to follow in nice ole Mr. Afton's footsteps, Vanessa, a nightguard who really doesn't want you here, the crazed glamrock animatronics, and the S.T.A.F.F. bots. You'll have only your wristwatch, your wits, and the help of Glamrock Freddy himself to survive until 6 AM.

Following several delays of its original 2020 release, the game was released for PlayStation 5, PlayStation 4 and PC on December 16th, 2021, with a three-month exclusivity detail before launching on other consoles.

When chasing the player, Vanny makes your screen become filled with static, an odd detail since it's from a human's point of view.

When chasing the player, Vanny makes your screen become filled with static, an odd detail since it's from a human's point of view.